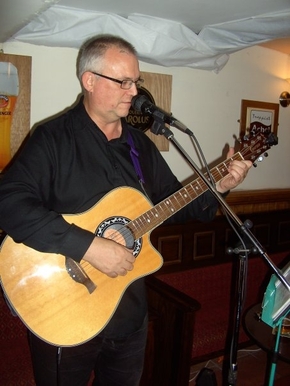 In the beginning was The Uninvited, a punk band that hailed from Sandbach,  We contributed one track to Cry Havoc a compilation LP on Slip Records, played the Victoria Hall in Hanley; and got air-play on the John Peel show, along with many other long forgotten hopefuls.  Around the same time Cal was in a band, with my brother Russ, called Antisocial.
They created a noise described, by one of the Shavington elders, as “being like  a bloody great buzzsaw”; and did a good job of scaring the locals. However, in  due course punk fizzled out; and by the end of the 70's both outfits had passed  their sell-by date. A new entity arose out the ashes: Tower Struck Down named after the tarot card of misfortune. With hind sight perhaps  that wasn't such a good idea. Now this may be heresy to some; but Cal wasn't the original singer, that was my brother Russ who had also briefly fronted the Uninvited and a proto-Tower outfit called Cracked Actor. However, that state of  affairs didn't last long; and it was only when Cal joined the band that things  took off and TSD was truly born.

That original line-up settled down as Cal  (vocals), myself (guitar), Pete Maden (drums) and Ivan Smith (bass)  We  also acquired a lighting technician called Frank
Highfield. Frank had  constructed a Scrap Heap Challenge lighting rig out of
bits of metal and old  dulux cans. It  looked a bit ramshackle, but it did
the job. I don't think you  would get it past health and safety nowadays! I
remember doing a gig, at The  Gallery in Manchester, where Frank kept climbing
up the said gallery and jumping  off onto the dance floor. He was what they call
“a bit of a character”. We later  found out that Big Country had played there
the previous week, they became  famous, we didn't.

In our naivety we wanted to go beyond  being just another rock covers band; and create something different. We were  trying to push our musical boundaries. In my case, ambition sometimes  outstripped ability! At that time the music was a collaborative effort. I
remember that I was always looking for interesting sounds out of my effects
pedals; and Pete Maden had got a set of timbales which added a new dimension to
the drums. Cal worked on his lyrics and added a distinctive vocal style. Ivan
played the bass lines I told him to. We were all dedicated to the band and put
in many hours practising at the Ludford Street Centre.

With a set under our belt it was time  to gig! Cal was even then a showman and knew how to work a crowd. Within a short period of time; and much to my surprise we had a following. We played a circuit of gigs around Crewe, Stoke Liverpool, Manchester and Birmingham; and didn't we
just live up to the name?

One of our first gigs was at the old  Grand Junction in Crewe. That went fine until some idiot decided to take on Cal on a fight. Cal had a bit of a hard man reputation at the the time and
unfortunately there was always some prannock wanting to prove himself. Ivan was
too stoned to notice and I bravely got out of the way. It fell to the landlady
to break them up. Don't ever mess with Crewe pub landladies, they're fearsome
women! That set the tone of things to come.

We then played a  pub gig (sadly the  name escapes me) at the back of the Victoria Hall in Stoke. The pub has sadly  gone, but it was good gig (it had it's own PA and lights, somewhat rare
in the  early 80s). We got halfway through the set and were stopped by the
management.  Pete noticed a wisp of smoke across the ceiling. The pub had caught
fire. We  legged it with our equipment back to the coach. We also managed to
acquire two  extra bass bins, which were duly returned the following day, after
a polite  request from the owner (and a promise not involve the fuzz). It was
later  reported that bad boys Tower Struck Down had tried to torch the place.
Needless  to say we hadn't.

After that, we had a sort of residency  at The Railway in Brum, a pub owned by the manager of one hit wonder Musical  Youth, unfortunately he also had the habit of double booking us each week. I  don't know what he was passing on the left hand side, but it was a sure as hell
not the “duchy”. Again the pub was well kitted out; and the stage actually had
curtains, we felt like the band from the Muppet Show. All we needed was Stadtler
and Waldorf to heckle us.

Another memorable gig was when we played the Portland Bars, in Manchester, City had played United that same day. We got into the first number and the whole pub became a massive brawl.
Eventually it was broken up by the landlord coming out from behind the bar with
a megaphone. The pub emptied and we ended up playing to our own following.
Ironically we had brought our own coach-load of  “supporters”. I remember
we  drowned our sorrows in a Manchester nightclub, if I tried to drink that
amount  now, it would probably kill me.

We also took the opportunity to record  a couple of tracks at Cargo Studios in Rochdale. That was a great experience for a young musician. We were able to experiment with sounds and layer things in ways we were previously unable. Getting there and back was another matter! We
had a Ford Transit with most of the band and the gear in the back. Cal drove it
like his Ford escort. Imagine being stuck in a tumble dryer with a pile of
bricks and that gets something close. That and the smelly farts, it wasn't
nice!

Why did I leave? I suppose the whole  thing was going nowhere. The demo got a lukewarm reception from those record  companies who deigned to listen to it. One comment was “they're  OK , but sound  like album filler tracks”, a bit harsh maybe? You can be the judge.
Another  reason was the constant aggro at gigs, it just got a bit wearing after
a while.  Maybe it was just a general disillusionment with the music industry;
and the  realisation that it is first and foremost a money making enterprise.
Anyway that  signalled the end of the first chapter, as the band split up soon
after  (seemingly for good).

When Tower reformed a couple of years  later, it was very much Cal's band. I had no regrets and supported them, from  then on in, as as a fan. When I heard that Cal had died I was saddened, but not  surprised. Had he kept TSD going, would things have been different, who
knows?