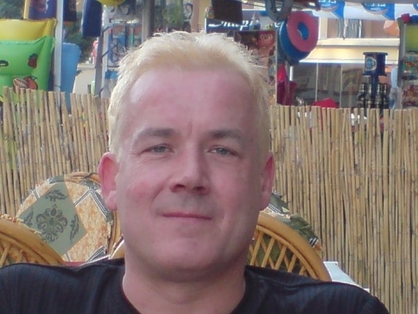 Tim  joined in 1985, cal and me were working on the songs in my bed-sit in west avenue from early 85, with a tandy drum machine to start  with, then Pete maiden re-joined
but due to work commitments couldn’t gig with us  so he was replaced by Huw (cal nicknamed him the brat).
our first paid gig was the Brunel university London  supporting a band called the skeletal family (they had a single out) they pulled  out of the gig and we were suddenly headlining though we had only properly rehearsed a short set (support act etc) then we started gigging al over the place.
cal used to put a coach on for Crewe people so we  had a receptive crowd wherever we went (that was an inspired move) we cut a demo  in Whitchurch (will tag the 2 tracks for you) we also made deals with bands  around the country to the effect that they would support us locally and we would  support them in their local venues, another good cal idea.. in 1988  we got involved with the running of club sky in high street (now Metz club) and  running a p.a and cut 2 tracks with les from the climax blues band and Des Parton producing at their studio in Hanley. (to my shame i cant find a copy)
towards the end of 88 things started unravelling, my father died (I played a gig
the same night on Cals insistence) and the slog of late nights and no money were
taking a toll on me, Cals musical direction was changing to and I didn't want to
go that way, so I left in 89, Tim followed not long after, something to do with
Cal punching his Brother.