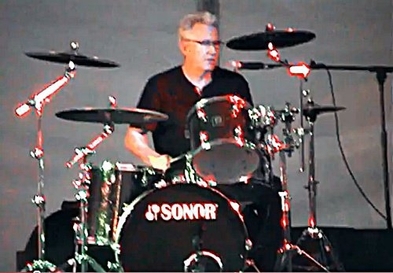 Where do I start?
Well, the Leisure Club in Edleston Rd, Crewe is where I met Cal, I was in there quite a bit, watching bands or  taking part in the Jam Night on Wednesdays.
This is 1991 and Cal is getting a band together called Tower Struck Down       and as I wasn't in a band at the time I said OK.
Cal had also recruited Nick Bayes on Bass and Bredon Darlington on guitar and that was the basic band.
We went to the Imp on Edleston road one Wednesday afternoon  (I think) and pledged our allegiance to all things "Tower" and so it began.
Cal was a hard taskmaster and we rehearsed everywhere and every when until  we had a set together, then we were ready to go.
Cal wanted to add a more folk/rock feel to the band and wanted to include another acoustic instrument to make it a little different to other local bands at the time.
Think of the Levelers and The Waterboys and you get some idea of what Cal was after.

Before we found our next band member we did a few gigs around the local  area as a Four piece band, including New Years Eve 1991 when we played 2  gigs, The Scrapmans Ball in Sandbach and the Leisure club in Crewe.

The first person we tried out was Martin Foskit who played Mandolin  and Flute but it didn't  seem to work out,  it was said that he had a bath more than once a month and didn't like Special Brew! This didn't suit Cal's idea of an "On the road band", so he had to go. (only joking Martin :)
Next came Martin Wright, we found him sleeping in his car with his dog, "Pubdog" who was his constant companion and never left his side. Martin played Fiddle and Banjo! We rehearsed Martin in and away we went...
None of us were officially working at the time so we set off in a headlong dash to introduce the world to the sound of the new TSD.
Over the next few months  We played everywhere we could and started to build up a small following, it seemed people liked the noise we were making and we liked making it.

There is so much more to tell and I hope to steadily build up this site with memories from other members of the band and a lot more from me......