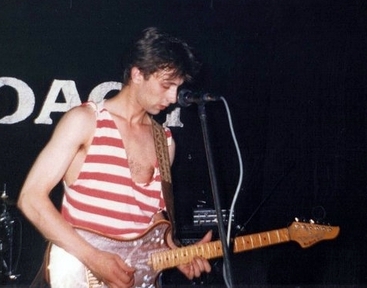 Me and Tower Struck Down by Tim Scott aged 48

I’d been in Crewe since 1981. I’d moved from
Liverpool to start a course at Crewe and Alsager College. I failed miserably as  a student because a) I was having a good time all the time and b) I’m bone idle.

I’d been playing guitar in a band back home but
was tired of legging it back for rehearsals and gigs all the time. I’d known  bassist Nigel Tomkinson for a few months and I’d seen him playing in a dodgy  rock band wearing a headband. Nige’s flat off West Street was disgusting, like  something out of Withnail and I. But my terraced house on Earle Street was  nearly as bad so I felt at home in his place, climbing over video-player parts,  motorbike-spares and cat-shit.

He  introduced me to Cal in 1985., just after I’d jacked my band in. Over tea and  spliffs at Nige’s, we discussed getting something together. Cal played us some  of his stuff and I liked it straightaway. Unlike 99% of the music being made in  Crewe at that time, it had nothing to do with Floyd, Zeppelin or ZZ Top. I mean,  I loved those bands, I still do, but come on, “Lets do something new!!”  Cal had  some really catchy tunes. It was pop-music. It wasn’t punk but it was energetic  and great fun to play. Plus Cal had the attitude that makes a great front-man.  So that was it, we had a band.  The first gig was at London Uni in Uxbridge.  Before the gig, Cal took me to John Darlington’s caravan (!), where, as I  remember, he frightened John into lending me a lovely white Gibson Les Paul. We  took a van to London …. stoned when we set off and stoned when we got back. I  wasn’t sure how the trendy London students would take to us and I was dead  nervous. But we went down a storm. I was in a great band.

Over the next few years we became the “biggest  band in Crewe” Ha ha! That sounds a bit crap now but it was great at the time.  We played the likes of The Cheshire Cheese in Shavington, The Angel (an  underground dump), Th Railway, Crew and Alsager College, Queens Park  and far too many jam-nights! But we really came into our own with the coach-trips.  50-odd fans would turn up time and again to travel with us to exotic locations  like Leicester, West Bromwich and Dudley. It would be a party there and a party back. Great fun. We supported one hit-wonders Latin Quarter at Keele Uni, our  biggest gig I think.

One New Years Eve at The Cheese we decided we’d do a punk version of Auld Lang Syne at midnight and Cal would trash his guitar  (a cheapo-one, not his Rickenbacker!) We were given bad advice and started too  early. Cal did his guitar-trashing thing and when we finished someone shouted  out “Its only 2 minutes to”!

I lived in Helmsville, above the doctor’s for a  while, the corner of West St and Hightown. It was the party-house. I was on the  dole and permanently skint. I had an aversion to getting up before noon and hard  work. I didn’t own a decent guitar. For a while I borrowed a Gibson SG  double-neck copy. It weighed a ton! I nearly fainted when I had to do a gig with  it when I was flued-up. And no, I never played Stairway on it. Eventually the  band clubbed together and bought me a Washburn Paduak guitar and an amp.
Nigel robbed a load of electrical equipment from Crewe Works to make some stage-lights. He hid it near the perimeter, under some stones. We arrived in Cal’s car and swiped it under the fence and away … it felt like Escape from Colditz!
Birchy and Chuckiin would light smoke-pellets at the front of the stage … for that cut-price dry-ice effect. They stank and clogged your throat up. Cal had to tell them to give it a rest!
I wore a pair of PVC trousers for gigs. They looked great but they were NEVER washed …. Not once in four years.
We managed to drag our arses to a couple of recording studios but under-performed because we didn’t have a clue and were too-stoned A pattern was evolving! It looks as though those demos we did finish  have been lost for good, which is a huge shame. Huw, our drummer, had aspirations to be a record-producer and bought a massive mixing-desk that he  installed in his flat. It had belonged to Andy Summers from The Police. But I  can’t remember recording anything great on it.
Cal wrote some really good music. His voice had  melody AND aggression. His rhythm guitar-playing was brilliant. And the rest of  us weren’t bad either. At gigs, he’d lay into apathetic audiences, “Get off your  arses,  you lazy fuckers!” It usually worked. But the mid 80’s was an odd time  for music. Punk had died a death. New-Wave didn’t really mean an awful lot. And  Rick Astley was Top of The fucking Pops. Despite the likes of the “big three”;
New Order, The Bunnymen and U2, the music scene felt a bit mixed-up and flat. We all listened to shed-loads of Reggae but we were never going to play that!
Maybe  if we’d existed a few years earlier, or later, we’d have made a bigger splash,  who knows?

We sent off our demos to record companies but  they weren’t interested. With hindsight we should have played more gigs in  Liverpool and Manchester and built up a bit of a buzz. But we didn’t. After a  while it felt like we were going round in circles.  4 years down the line I’d  had enough and left. Then Cal and I had a massive falling-out and I got out of  Crewe. I moved to Manchester just as Acid-House, The Hacienda, The Roses and The  Mondays were all taking-off. Talk about great-timing … My Melon got well and  truly twisted. Over the next few years I’d cut virtually all my ties with Crewe  but occasionally heard that Cal had got a new band and a new sound for TSD. They  did really well too.

After leaving Crewe in ’89 I never spoke to Cal  again. I never went back to Crewe again. Then 22 years later I was told he’d  died. Fuck. He was the same age as me. We played in a band. He was a mate. So,  back to Crewe once more …. for his funeral. Shit. I met his mum for the very  first time. I met his daughter, Ellie. I met some old faces. It was great but  really really sad at the same time. Sad because he’d died and sad because we  were all sat there thinking “Where did the time go”?
I never stopped playing music. I’m still at it. I  don’t think Cal stopped either, even near the end. Thanks for the memories Tower  Struck Down, it was a fucking blast.

Big shouts go out to roadie and all-round  good-egg “Chunky” Chris Vaughan, Nige, Huw “The Brat” and Rachel, Manager Roger  “Bodger” Thomas, Manager Kev Jenks, “Birchy” R.I.P. for the sarcasm, Chukin for the chuckles., Tim Lavender and the Shavington crew for turning up on the coach.
Lyn, Cheryl and Karen for the laughs chez Lyn’s, how many times did we watch  “Stop Making Sense” and “The Ruttles”?
One on the One, The Train Set, Dr Phibes, The  Expanding Men and the other Crewe bands who’d had enough of Floyd, Zeppelin and
ZZ bloody Top!