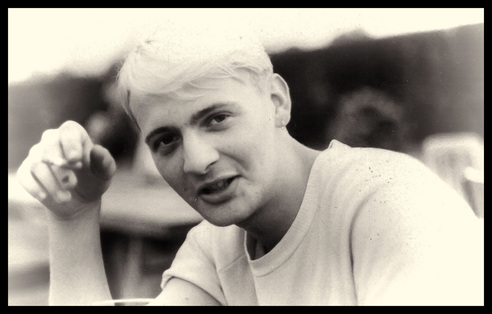 This text was taken from the eulogy at Marks funeral
Mark was born in October 1962 at the Barony Hospital in  Nantvvich,  a longed-for and only child. Pam remembers him as feisty, headstrong and mischievous from infancy, and that he would go his own way rather than anyone else’s. He was a little wild as a teenager, in and out of scrapes as boys often are while they grow into men, but he was a loving son and was loved and doted on in return by Pam and Chris, and by the wider family.
Like his father before him Mark was a talented footballer, and aspired to play at a professional level. Knee problems forced him to give up this dream in his late teens, but he maintained a lifelong love of the beautiful game, and particularly Manchester United.
Mark was an apprentice and then employee at Crewe Works until his mid twenties, when he left to set up a sound-engineering company, and to pursue greater success with his band, the legendary Tower Struck Down.
Mark had discovered, via punk rock, a leaning towards the wilder  side of music. As a teenager he wanted to emulate his musical idols, and asked his parents to buy him a guitar. This was the beginning of something special. 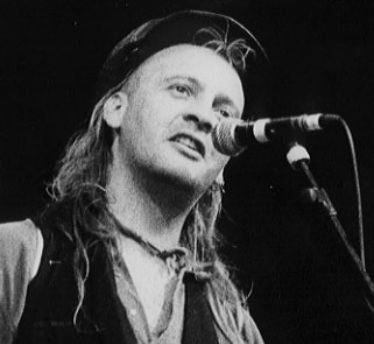 Mark found he had a natural ability as a rhythm guitarist, and a powerful singing voice with a distinctive, husky edge to it.
More significantly, Mark had a considerable talent for song-writing. He had never been academically inclined, yet he could construct with ease songs of great melody, rhythm, lyric and hook-line.
These songs are accessible and meaningful, full of spirit and imagination; songs experienced very much at a physical level and also felt in the soul, inspirational songs that only need to be heard to be remembered. Mark wrote these songs proliﬁcally, and with them grabbed the attention and lifelong loyalty of faithful followers.

From punk rock beginnings, and a stint as lead singer (complete with black eye liner) for the post-punk Oedipus Complex, there followed
considerable local success in the early eighties for the new wave(complete with mullet haircuts) Tower Struck Down. Towers popularity grew and spread throughout the late eighties and nineties Personnel changed along the way, but Mark remained the heart, soul and driving force as the band evolved into the thrash-folk, dreadlocked, party-animals that were the Tower Struck Down of later name and legend.
With its hard-edged approach to British folk-rock, the band was praised by Folk Roots magazine as having “...crafted one of the ' most dynamic sounds in the United Kingdom... with its catchy melodies, memorable chants, and ﬁddle-driven rhythms” Mark and the band played with an elite list, including Fairport
Convention, Chumbawumba, Tom Robinson, Kirsty McColl, New Model Army, Shane McGowan and many other notables. There were memorable sets at Glastonbury, where the band played even as the stage was sinking into the mud, and at Cropredy Festival, where Tower Struck Down were hailed as being the best band to open the festival in its history. 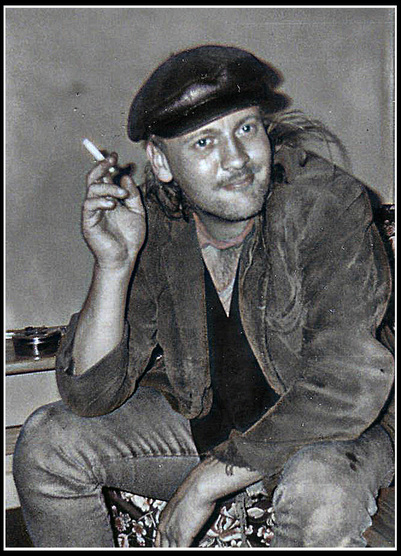 Mark's enduring legacy to music is the locally and nationally acclaimed Tower Struck Down album, All the Kings Men.
In the year of its release, All the Kings Men was rated in the top ten albums of that year by Back Street Heroes magazine. This album is
treasured in record collections of Tower fans all over Britain and Europe, and still to be found in pub and venue jukeboxes - a lasting memento of unforgettable Tower gigs.

Mark has also left us a part-of himself in his daughter   Elinor. Ellie was born in June of 1991 to Mark and Johanna.
Mark loved Ellie intensely from the moment he set eyes on her.
They had a warm and playful relationship during her growing up years, and Mark was incredibly proud of Ellie's own musical achievements and accomplishments. Through the ups and downs of family life, memories remain of many happy times that Ellie and her mum will always treasure.  .


The death of Mark's father, Chris, in 2002 affected him  deeply. He withdrew from the music scene, putting Tower Struck Down on hold, and focussing a quieter energy on work and family life.
Mark worked hard as a railway electrician for First Engineering, Carillion and Babcock, and always gave the very best of his ability.
He remained creative in his home studio and discovering and championing the music of up-and-coming bands.

Mark’s recent struggle is not easy to understand. After his father’s death, other life events seemed to hit him harder. He was not one who wanted to talk in any depth about his problems, and chose his own way of dealing with what troubled him, preferring to make decisions for himself about how he would manage his journey. Mark was as characteristically headstrong a man as he had been a child, and this often left others helpless to help him. Recent months have been intensely painful for all concerned, but we try to look back on this time with compassion and understanding, and the realisation that there is some human frailty in each of us. This was part of the person that Mark was.The tragedy is that he could not find a way back to us before his physical health deteriorated. ‘Mark died on the afternoon of 14th June 2011.

Above all, we remember the gentle, warm, kind, funny and loving side to his nature. Mark was a “really nice guy" as so many have said, who tried to do the best he could with what he had. This unforgettable man was a creative soul, made doubly unforgettable by his music. He loved his daughter and loved his mum; he loved his guitar and the simple things in life - an endless supply of tunes on his l-Pod, a walk with the dog, the weekend newspaper, chicken tikka masala, football and sunshine.
This man was Mark and Cal; Daddy and Son; Uncle, Cousin and Nephew; Companion and Friend; Musician and Local Legend.
A much-loved and much-missed man.